Walking down the street, feeling a bit sorry for myself, I saw a woman sitting on a doorstep, waiting for the bus. She looked tired, judging from the grocery bags and umbrellas she was carrying. But, more than fatigue or worry, her face was burdened with three children and despair. As if the children around her, one sitting beside her and two standing in front of her, blocking the pavement for the many casual and unaware zombies, were no more than crude extensions of herself. Pale reflections in concave mirrors, copies not only of her face but also of her despondent existence, as if the milk, food, and love she gave them were nothing more than despair. Children created not out of love, not out of flesh and blood, not out of serenity, not out of food, but out of despair. She could sell despair, should someone buy it. She would be a desperate millionaire, the queen of despair and chips.

I became desperate to erase that despair from my mind. That despaired face, those despaired shopping bags; that despairing family. The despaired picture lingered in my mind for a long time. From the beginning to the end of times. Because, as I know now, there’s no woman, no children, no family, and no shopping bags. There is only despair. 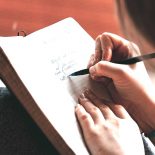 This website uses cookies to improve your experience while you navigate through the website. Out of these cookies, the cookies that are categorized as necessary are stored on your browser as they are essential for the working of basic functionalities of the website. We also use third-party cookies that help us analyze and understand how you use this website. These cookies will be stored in your browser only with your consent. You also have the option to opt-out of these cookies. But opting out of some of these cookies may have an effect on your browsing experience.
Necessary Sempre activado
Necessary cookies are absolutely essential for the website to function properly. This category only includes cookies that ensures basic functionalities and security features of the website. These cookies do not store any personal information.
Functional
Functional cookies help to perform certain functionalities like sharing the content of the website on social media platforms, collect feedbacks, and other third-party features.
Performance
Performance cookies are used to understand and analyze the key performance indexes of the website which helps in delivering a better user experience for the visitors.
Analytics
Analytical cookies are used to understand how visitors interact with the website. These cookies help provide information on metrics the number of visitors, bounce rate, traffic source, etc.
Advertisement
Advertisement cookies are used to provide visitors with relevant ads and marketing campaigns. These cookies track visitors across websites and collect information to provide customized ads.
Others
Other uncategorized cookies are those that are being analyzed and have not been classified into a category as yet.
GUARDAR E ACEITAR